POC Perspectives is a series of interviews, experiences, and stories from LGBTQ and allied People of Color from within our community. This project is beginning during Black History Month – a significant and crucial time to elevate these stories – and will continue throughout the year. Out & Equal is committed to elevating the profile of members of our community who have diverse intersectional identities. Click here to read other interviews in this series.

First, can you share a little bit about your background and how your family, community, chosen family, friends and where you grew up may have shaped you to where you are now and how that all might’ve shaped your journey along the way.

I was born and raised on the Monterey Peninsula in a small town called Seaside. It’s very brown and there’s a large military base – that was a big influence with the demographics of where I lived. My dad was black and was a lot older when he had me. I received my schooling from him based on the era in which he was raised: I would go to school and the kids were like all shades of brown. I remember looking back at a class picture and there were two kids that were what I would say were visibly Caucasian kids, out of a class of over 20. Here I have this Japanese mother, who is an immigrant. My friends come over and I have to translate for them even though she’s speaking English…

So I always had identity issues. I remember having to fill out some forms and I didn’t know what to do when it came to ethnicity. The forms said, “check one.” I’m like, “I’m not one.” And at that time there was no two or more. I went to an administrator to ask what to do. She says, “Well, your dad’s black, so you check black.” I felt a tremendous amount of guilt because I was so, so incredibly close to my mother. You know, how dare you tell me to limit my identity to who my father is. I love my father just as much, but I was incredibly close to my mom. I check a ton of boxes: I come from a military family. I’m part of the LGBTQ community. I’m Black. I’m Japanese. I’m a woman. I’m the youngest of six, where the other five are my half siblings.

Can you touch a little bit on what you just said about identifying your own biases? As you said, you check a lot of boxes – member of the LGBTQ community, a woman, a person of color, etc. It’s really powerful to hear you say you have your own biases.

I have no problem sharing my bias with people because what I really need to do is to make sure that those biases that I have don’t influence me to make really bad decisions. For example, and I’m just going to be very transparent with all of you: Yes, I have a strong bias against white gay men. And the reason why is because I was a bartender at one of the largest gay clubs in San Francisco for a very long time and I saw it happen in front of my eyes. I saw this elite behavior, if you will, or this privileged behavior happening. And listen, white men are privileged. White, gay men are privileged. Maybe even more so from an economic perspective.

But having said that, I have gay, white male friends. I have people that I absolutely adore that are gay, white men. So I can’t let that bias eliminate gay, white men from my life. Or if a gay, white man came in and wanted a job from me, I cannot hold that against them. As a matter of fact, my “gubby” is a white gay man.

So, by speaking it out loud, it’s something that I have. I can’t let it create these bad behaviors.

What would you share with young black people – we can also open this up to young people of color – who are on a similar professional trajectory as you? What do you wish someone had told you early in your career?

This is tough. What I would say is when companies say, “be your authentic self,” don’t take it literally. Especially for black professionals, I don’t care what anyone says, you still have to show up better than everybody else and that’s going to be very hard for people to swallow. But particularly younger people, I need them to really immerse themselves with the history of this country and not pretend like everything’s good…

Because I don’t care what you think, people are judging you. Don’t give anyone any reason to think of you as any as less than you… And that might include dressing up. That might include, if you’ve got an open bar at the company event, don’t get drunk. You’re always being interviewed. You’re always being evaluated all eyes on you… Assess your environment because you are incredibly smart when you can adjust, don’t expect other people to adjust for you. You do the adjusting.

I wished someone were to put the mirror up a little bit sooner for me.

Do you mentor people or is there a mentorship program at Visa that you are involved in?

There is not an official program, but I do, mentor a ton of people. And I think it’s just natural for me. I don’t even think of it as mentoring. I think it’s just exposing people to things I know and it either resonates or it doesn’t. I don’t know anything that anyone else doesn’t know. Well let me rephrase that. The things I do know are based on a lot of experience and to me when I talk to people about that, they just haven’t experienced it yet.

I mentioned earlier that our theme this year is the Business of Belonging. And so going off of that, what does belonging mean to you personally? And what does that look like for you professionally? If you could share an example of where belonging was made real for you whether that’s at your company now, you know, in a previous job or personally that would be great.

I think belonging for me is when someone takes the time to get to know you and your style. There’s nothing worse than being in a situation where someone assumes that you are a certain way because of the work that you do or because of the level that you’re at. So for example, don’t ever call on me in a meeting. If I have something to say, I’ll raise my hand and I’ll say it. And a lot of times people do call on me: “Patty, what do you think?” Don’t put me on the spot like that. So I feel like I belong when someone’s like, “I know Patty likes to process things and let’s just make sure that we give Patty some time to provide her feedback to us.” Knowing someone’s style can create such an impactful experience for them. Then they’ll feel like they really belong cause you’re listening to them.

I have one more question for you and I hope this is kind of a fun question. Who are some of your favorite heroes in your personal or career journey – black, LGBTQ or otherwise? And do you have a favorite quote you would want to share with us?

Yes. My quote is actually tattooed on my forearm “There is always a solution.” And that’s a Micky Dingle. Maybe not in those exact words, but that was kinda how she lived her life: “Don’t worry about, it’ll work out.”

I have a lot of local heroes. Michelle Meow by far is someone that I admire. She would probably say that I’m like her big sister and like more of her mentor, but you know, here’s this young immigrant woman who has just turned nothing into something that I feel is very impactful with the work she’s doing at the Commonwealth Club. She struggles, but I try to be there as much as I can for her.

I met Stephen Huey when he was at bank of America doing the corporate thing with the blue suits. And to see him thriving at Out & Equal has been incredibly rewarding to me. I guess there’s a little bit inside of me that wonders if I don’t have the guts to do some of that work because I like my Visa stock. The nonprofit world to me is so scary. But I admire people doing that work all over the world. I think about people like that that really motivate me just by what they do normally. They’re risk takers because I’m super conservative, I would say. 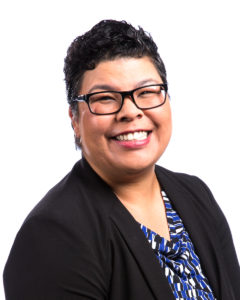 Prior to joining Visa, Patty held the role of Director, Belonging & Diversity at Workday, where she launched the company’s first Belonging and Diversity function. Previously, Patty worked for the CSAA Insurance Group, where she designed and facilitated Diversity and Cultural Competence training and implemented the Executive Diversity Council chaired by the CEO. At both companies, she managed comprehensive diversity and inclusion efforts; played an integral part in aligning diversity and inclusion goals into the business; and provided key cultural insight on the development of products and services.

Patty began her career as a producer for ABC 7 network television and later served as the Promotion Director for KTSF 26, the leading television station for the Asian community in the Bay Area. She holds a degree in Broadcast Communications from San Francisco State University, an MBA from Brandman University and is also a graduate of Leadership San Francisco, a trustee program for the city of San Francisco.

A Monterey, California native, Patty is currently on the Advisory Board for Self-eSTEM and has served on the board of directors for the Asian Women’s Shelter, Project Open Hand, Chinese Newcomer Service Center, Angel Island Immigration Station Foundation and Na Lei Hulu I Ka Wekiu, an organization that promotes Hawaiian culture through hula dance