SAN FRANCISCO, October 19, 2017—Only five percent of lesbian, gay, bisexual, transgender, and intersex (LGBTI) employees in China felt comfortable coming out in the workplace and 14 percent have reported being denied employment for being LGBTI, according to a recent survey of LGBTI people in China conducted by the United Nations Development Programme and the Sexualities Research Program of The Chinese University of Hong Kong and released for the first time at the Out & Equal Workplace Summit in Philadelphia on October 9.

The recent survey represents the largest dataset of its kind in China. Analyzing data from more than 18,000 LGBTI respondents, it provides an in-depth look at the experiences of LGBTI employees in China and highlights the importance of workplace protections that are inclusive of LGBTI people. The survey was carried out in China by Being LGBTI in Asia, a UNDP regional program aimed at addressing inequality, violence and discrimination on the basis of sexual orientation, gender identity or intersex status, and promoting universal access to health and social services in collaboration with Beijing University and the Beijing LGBTI Center.

“These unprecedented survey results show that LGBTI people in the world’s second largest economy face tremendous challenges in the workplace that prevent them from bringing their full selves to work every day,” said Out & Equal Founder and CEO Selisse Berry. “Given that, it’s important that we continue to expand our work on behalf of LGBT people around the world.”
Additionally, eight percent of people interviewed believe they had been fired for being LGBTI. Other forms of negative treatment that LGBTI people reported experiencing in the workplace in China included:

Yiu-Tung Suen, Director of the Sexualities Research Program at The Chinese University of Hong Kong, pressed companies to consider the cost of not adopting protective policies, “When more organizations support diversity and inclusion, can organizations afford to not support LGBTI inclusion as they may alienate the educated millennials who carefully consider the ethical stance of companies before they spend money?”

Despite the positive effects protective policies can have on the treatment of LGBTI individuals, there was an extreme lack of LGBTI-protective policies and awareness trainings. Only eight percent of respondents reported that their current workplace has a clearly stated LGBTI non-discrimination policy and only four percent reported that their current workplace provides training on awareness of LGBTI issues.
“The private sector has a critical role in promoting the inclusion of LGBTI people,” said Edmund Settle, the regional Policy Advisor for UNDP based in Bangkok. “By promoting inclusion and diversity policies in the workplace, the private sector can demonstrate that LGBTI inclusion is not only achievable, but it is good for people, business and the economy.” 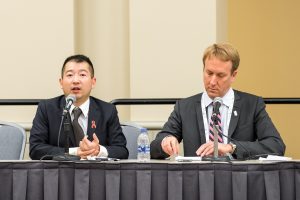 Yiu-Tung Suen and Edmund Settle discuss their survey findings at the Out and Equal Workplace Summit in Philadelphia, PA. (Photo by Sarah Gascoine)